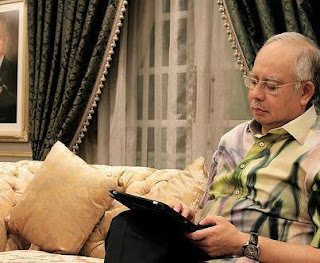 BN will field new faces for 49 per cent of the 505 state seats being contested and up to one-third of the 222 parliamentary seats in the May 5 general election.

Umno Youth leader Khairy Jamaluddin wrote on his Facebook page that there will b 33% new faces for Parliamentary seats and 49% for State seats.

Prime Minister and BN chairman Datuk Seri Najib Tun Razak this morning met the State Barisan chairmen and handed letters of credentials  of the candidates to them.

Later, Najib announced that the coalition would be fielding 33 per cent new faces for the Parliamentary constituencies while for the State Assembly seats 49 per cent would be new faces.

He said this was to meet the wishes and hopes of the voters who wanted to see that the BN and Umno was prepared to make the change.

He said the balance between new and experienced candidates was most important because the BN did not want to merely highlight the changes but as a party, the coalition should have people who could administer and deliver the aspirations of the people.

“If everyone of those in the government are new faces without any experience, this will hinder the BN government’s ability to fulfill the wishes and needs of the rakyat,” he told reporters after handing out the documents of Nomination and BN Pledge to the presidents of the BN component parties and state BN chairmen, here.

Najib pointed out that 91 per cent of the BN candidates for the Parliamentary seats had minimum academic qualification of a diploma.

He said that 31 per cent of the BN candidates for Parliamentary seats comprised professionals including academicians, doctors, lawyers as well as ulamas.

“In addition, there are also candidates comprising popular individuals at the grassroots level, the focus is on their capability to become grassroots leaders,” he said.

Disclosing that the candidates list was also balanced with the participation of women and youths, Najib said that most of the new faces were being fielded in the opposition-led states.

Describing the candidates line-up as the “Transformation Team for BN”, Najib was confident that it was the strongest team and could fulfill the ‘Aku Janji BN’ or the ‘BN Pledge’ and drive the government transformation plan.

“I hope the evaluation on the line-up would be looked at from the whole context, that is, not only those who are contesting but their capability in the context of forming a solid and strong government that could fulfill the needs and aspirations of the people in future.

“We cannot just look at this general election but should look at the subsequent developments, because we must have a line-up that can implement all the BN pledges,” he said, referring to the BN election manifesto launched recently that consisted of 17 issues for the prosperity of the people.

Najib said the ability to fulfill the BN Pledge was among the principles adopted in deciding the final list of candidates.

Taking the opportunity to record his appreciation to the former BN elected representatives, Najib, who is also the Prime Minister, said those not selected should not look at it as a denial of their services and contributions all this time.

“It does not mean that those who are not selected have failed, or have problems or disputes, but under the circumstances where the community and voters demand for change, some of the members have to make way to enable the changes to be carried out,” he said.

He hoped that they would continue to give their support and contribution to the party during and after the general election.

Asked about the possibility that the candidates list would be amended, Najib said : “This is the final list. I don’t anticipate the need to change.

“…I hope such a situation does not arise. Legally and technically it can still be changed, but we are hoping that this is the final list,” he added.